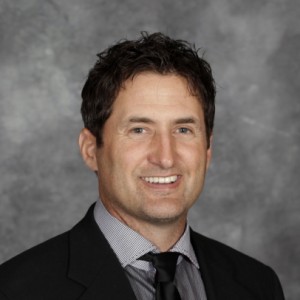 Dean was born and raised in Hanna, Alberta. The youngest of three sons, Dean grew up playing all sorts of different sports. He enjoyed baseball, basketball, competitive swimming, tennis, hockey, curling, track and field, and of course golf. He was fortunate to have a nine hole designed Les Furber course to play on as he learned the game. After graduation from school in Hanna, Dean went on to play hockey at Mount Royal College in Calgary and completed his Business Diploma. Dean then decided to pursue the game of golf and becoming a Golf Professional so he headed down to the San Diego Golf Academy and completed the two year training and was subsequently hired on at the Rossland Trail Golf and Country Club. He spent 3 years at Rossland Trail and then moved back closer to home to marry wife Julie and start a family. Dean worked two years at the Highwood Golf Course in High River and then was hired on at Pinebrook in 1996. Dean’s two daughters Gillian (7 years old) and Emma (4 years old) will have difficulty not becoming interested in both Golf with instruction from Dad and Highland Dancing with instruction from Mom. In November 2001, Dean took over full time as the Head Professional and Manager of Golf Operations at Pinebrook. He is extremely thankful to Pinebrook for making his place of work as enjoyable a place to be as he could have ever imagined. In his 11 years at Pinebrook he has become trained by such renowned instructors as Butch Harmon, David Leadbetter, Jim Flick, Scotty Cameron, Jim Hardy, Jimmy Ballard, Rick Smith, and Dave Pelz. Dean’s philosophy on teaching is to first of all find out what people want to achieve from the game of golf and from there create an enjoyable learning atmosphere that will help them achieve their goals.