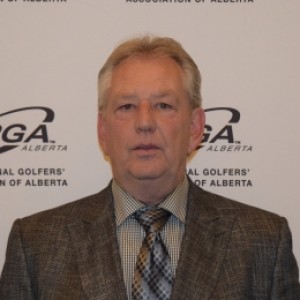 Born on June 11, 1956 in Niagara Falls, Ontario, Paul Lowe joined the PGA of Canada in 1978 starting his career in golf at the Bridgewater G&CC in Fort Erie, Ontario where he worked for seven seasons. Once achieving his Class ‘A’ status, Paul moved to Henderson Lake Golf Club under the guidance of Jim McLaughlin before accepting his first Head Professional position at the Hillcrest Sports Centre in Moose Jaw, Saskatchewan in 1986. A number of moves across Western Canada within a year and a half brought him back to Henderson Lake to accept the Head Professional position where he remained for 28 years. It wasn’t long after this move that he began to stand out as a leader in the golf industry. Considered by his peers as a mentor in junior golf, retail, customer service, teaching and playing, Mr. Lowe has inspired many golf professionals to be the best version of themselves both on and off the course. He can be quoted by many saying, “treat the person off the street with the same quality you would give your best member”.

Under the mentorship of Jim McLaughlin, Paul learned the ‘Junior-Junior Program’ from the son of Jack McLaughlin, the very person that introduced it to the PGA of Canada and learned the importance of strong Junior Programs. With this guidance combined with his passion and commitment to junior development made his program one of the best in Southern Alberta at the time. This program that was held out of Henderson Lake provided an introduction to the game and stimulated the interest of golf to juniors in Lethbridge and the surrounding area. As soon a junior became a member at the Henderson Lake, they were automatically enrolled in this program with no extra charge for instruction. With two other Golf Professionals, Paul went on to implement a Junior Super League which included ten clubs in the Southern Alberta area including Medicine Hat, Lethbridge, Calgary and High River. Above the instruction that he provided, Paul made it his goal to start the Henderson Lake GC Junior Scholarship Program. To date, approximately $90,000 has been raised for the Scholarship Program. His innovative junior development ideas were recognized by the PGA of Alberta in 1998 & 2006 when he won Junior Leader of the Year. He was nominated three more times in this category and once for Club Professional of the Year in 2014.

Mike Mezei, writer for SCOREGolf and past PGA Tour Canada winner, and Dunc Mills, Executive Director of the McLennan Ross Junior Golf Tour both commended Paul for outstanding dedication to both Henderson Lake and junior golf in Canada in their 2014 articles.

In a further effort to develop Golf Professionals in Alberta, Paul, Brian Huculak, the current Executive Professional at the Lethbridge CC and the Director of Lethbridge College at the time introduced the PGA Golf Management Program to the College. The three were instrumental in building the noteworthy program which many PGA of Canada golf professionals were enrolled in.

Receiving the Life Professional designation in 2015, Paul remains to be active in the Association and continues to be a role model to many members. He takes great care of the ones in whom he sees great potential in and always inspires them to grow into Golf Professionals of their own. The Association is pleased to recognize Paul as the third Member to receive the PGA of Alberta Lifetime Achievement Award in the Leadership Category.